The inspiration for today’s blog post has come from Loganberry Books in Shaker Heights, OH, who for part of the month of March, Women’s History Month, turned around the books in their store written by male authors so that their spines, where are the names of the authors and the titles, were hidden.  The pictures from their store are stunning.

Before I even begin to discuss this display and my attempt to recreate it, I want to acknowledge that this social experiment is flawed in one glaring way:  This experiment relies on a binary gender system, erasing transgender, genderqueer, or nonbinary identities.

When I was uncertain of an author’s gender I relied first on the names and decided not to dig deeper if the name sounded stereotypically masculine or feminine (that’s laziness on my part, which I acknowledge too, but there are a lot of books and lot of authors in our house).  If I was still uncertain I went to the author’s bio and looked for gendered pronouns–a better clue to an author’s gender; I hope that most author’s bios use their preferred pronoun, but I cannot guarantee it, not in this day and age.

Recreating their experiment on the shelves in my home is not as stunning. 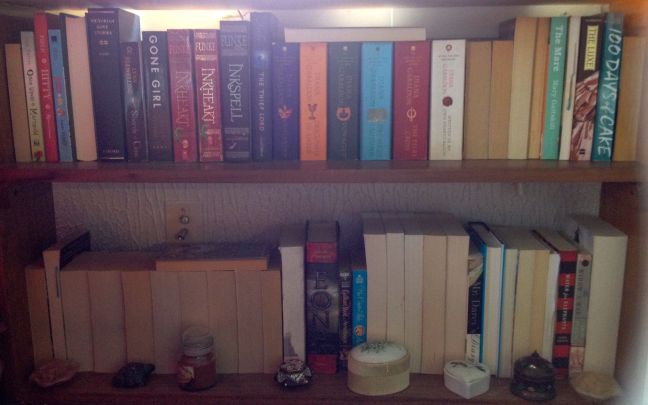 All of these pictures I’ve cropped quite fiercely because I really wanted to highlight the books, the spines and not the photograph itself.

With picture books, I decided that if a book was authored by a man but illustrated by a woman–or vice versa–it could remain spine-out, which means that all of the books that you see turned around at the right of the bottom-most shelf in this image are written and illustrated by men and that some of those that have their spines facing out still make room for men’s words–or for men’s illustrations.

The bookcases in my home are curated.  They consist only of books on which I or my roommate have spent money or one of us has deemed worthy to adopt–and only those that we deemed worthy of keeping.  We are both cisgendered women.  We both graduated from a women’s university.  We both consider ourselves feminists.  And we’re both writers.  That means some voices won’t be represented on our shelves.  Our collection ranges from Gilgamesh to books released just days ago, but I would guess that the majority of our books were all published within the last 30-40 years, a time when being an author was not an unacceptable choice for a woman of any means, though a time during which publishers still worried and possibly worry that a woman’s book about a boy won’t be read as widely as a man’s book about a boy (as in J. K. Rowling’s case.  She uses a gender neutral pen name rather than any combination of the feminine sounding Joanne Kathleen, and that’s the reason I’ve heard given for that choice).  I know that I have a penchant for books with “strong” (three-dimensional) women–which is not to say that one-dimensional women are absent from my shelves; that’s not the case, and I know it–I’m looking at you, Mr. Bradbury–and not to say that my shelves are devoid of books where women are a mere prize, a sidequest if you will (though admittedly, I’m having a harder time thinking of any book that might be on my shelves where that is the case at the moment).  I think it might be fair to say that one-dimensional female characters are less likely in women’s writing. 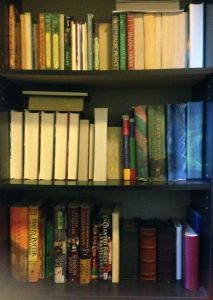 This is the most fiercely curated of my shelves.  It’s the only one that lives in my bedroom and consists only of favorite books of mine or (but mostly and) the ones I’m mostly likely to want to reach for at any given time to visit the characters, the world, a scene, a line.  That bookcase in particular features really only a few authors.  10 authors got turned around.  10 remained spine-out (myself excluded; the bottom right are photo albums)–Olivia Berrier, Cressida Cowell, Diane Duane, Eva Ibbotson, Ursula K. LeGuin, Jennifer Nielsen, J. K. Rowling, Sharon Shinn, Jo Walton, and Patricia C. Wrede.

Our shelves are not organized (particularly) by genre (the picture and board books are all shelved together, and nonfiction and poetry each have their own sections, not shown here).  I think performing this experiment on shelves divided by genre would be an interesting and probably enlightening twist.  As Cassandra Claire in her Draco Trilogy once pointed out, men aren’t expected to write those mass market romances, and I expect there is some discrimination against men who try to break into that market–or that there may be men writing romances under feminine pen names.  Science fiction and fantasy were for a long time a genre written primarily by and for men, and I think some of that prejudice against female writers still lingers–at least in epics and fantasy and science fiction written for adults.  I would be interested to see how children’s literature breaks up.  More picture books than I would have expected got turned around on my shelves, even allowing for women’s illustrations to counter the male authors.  Books shelved by the age of the intended audience would be another interesting twist.

It was very interesting to me see what did and didn’t get turned.

I was surprised that all of the manga my roommate owns (three series surveyed here) are written by women.  I was surprised that the American graphic novels (two series, one of which is a graphic novel series for the TV show Charmed, and a stand-alone) all got turned around, save one–and that is an older series that started in the late 70s, Elfquest, created by the husband and wife pair, Wendy and Richard Pini.

I noticed a lot of the swaths of white in our shelves were created by series–or by multiple books by the same author.  I think that’s true too of the swaths of color.  It seems once we find someone or something we like, we stick it out.  I know it’s true of the bookcase in my room, where 13 of the turned books belong to one author, and 11 of the spine-out books belong to J. K. Rowling.  It happened again in the case that has only two shelves.  One male author accounts for nine of those books, one accounts for five books, and another two have four books each turned around.  Meanwhile Diana Gabaldon accounts for six of the spine-out books.

I also just got a good laugh–a somewhat sad laugh–realizing that if J. K. Rowling was left out of the these pictures–or if she was only allowed to be represented with each book only once (13 individual titles), the shelves would look a lot whiter.  I know she’s the voice of our generation but between the two of us we own 29 of her books (most of that onus is admittedly on me.  Oops).  But then she is not the only writer from whom we own together more than one copy of a title, and I don’t know that that phenomenon disproportionately effected women.  In fact, it happened with 17 male authors but with only 14 female authors: Louisa May Alcott, Olivia Berrier, Suzanne Collins, Susan Cooper, Diane Duane, Cornelia Funke, Ellen Kushner, Madeleine L’Engle, Anne McCaffrey, Robin McKinley, Stephenie Meyer, Tamora Pierce, J. K. Rowling, and Patricia C. Wrede.  Though Rowling is the only author from whom we own four copies of one title.

These photos don’t represent all of our bookcases, just a sampling really (excluded are the ones for which getting a clear shot of the shelves in their entirety meant moving furniture and one the top of which was just too cluttered and messy for me to want to show the Internet).