I was a bit… shocked by this book, mostly because a coworker had recommended it, so I didn’t screen it for story time. The bullying, greedy pug, Pig, in a very Disney-villain type of accident falls from his perch and out the window. He is next seen all wrapped in bandages while the Dachshund dog, the hero, “good” or “poor” Trevor, finally plays with a toy and with Pig. This was a hit with my story time audience though. A little boy, maybe… four? I saw that family again and was told that he told all his family and friends about it. The ending is a bit grim, but no more grim than most fairytales. 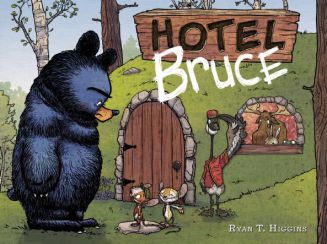 I loved this book more than the first in the series. Somehow this one seemed to better understand its audience, to play less to the parents, leaving more space for the kids (though there is still plenty for parents to laugh at, never fear). It begins with a quick recap and yet another migration South for the winter. The geese and Bruce return to Bruce’s cave to find that a group of mice have turned it into a hotel for all types of woodland creatures, with whom Bruce now has to share a bed and his kitchen, while the geese are pressed into service as bellhops. The grumpy bear as before finds he has a surprisingly soft heart, making him a laudable protagonist for children’s literature.

The redheaded protagonist, Mo, dressed in a dinosaur costume, imagines a dinosaur’s life is one of no rules, doing whatever he wants. To his mother’s argument that dinosaurs must get hungry with no dinnertime, he says they eat whenever they want. Dinosaurs of course are always messy.  In his imagination, Mo is a dinosaur, shown as such every few pages before flashing back to himself and his mother as they are.  Mo is a contrary child, but his mother obviously loves him. There don’t seem to be any real consequences to Mo’s contrariness, but he also seems to do all that his mom asks or tells him directly—at least eventually. The colorful illustrations—and particularly the creativity that allows the reader to see Mo and his Mom in their dinosaur-forms—are the biggest draw here. 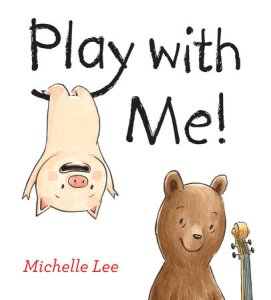 Pip is eager to play with Nico, but Nico is focused on his own playing—of the cello. Pip offers activity after activity to do with Nico, and Nico just keeps saying he’s uninterested and keeps playing his instrument. Finally, Pip shouts, “I MEANT PLAY WITH ME!” and Nico realizes that he’s excluded his friend with his solo playing. So he finds a way to include her without giving up on his own activity. It’s a story of compromise, and it’s a story of listening and paying attention to the desires of others. Nico and Pip are primarily illustrated on a white background with little distraction from their characters and actions.

It took six years for this team to write a sequel to the popular Goodnight, Goodnight, Construction Site, and it took a required story time to get me to read either of the books. Let me preface by saying I have never much been fascinated at any age as some are with construction vehicles. I learned loads (pun intended) from this book—at least, I learned names of vehicles it had never occurred to me to wonder over. Or I learned that I have a fun resource available when someone asks me what that vehicle is called—it would take more than one or even two readings for me to memorize those names.

Both are bedtime stories in the end; each ends with the vehicles tucking themselves in for the night. In Goodnight, Goodnight, Construction Site that is the whole drive of the plot. Each vehicle gets a few pages, its actions humanized and its bedtime regimen tailored to reflect its daytime activities and function. Each vehicle’s section ends with “Shhh… goodnight, [vehicle], goodnight.”

Both texts emphasize the importance and fun of hard work, but the second underscores teamwork. A job too big for the team of the first book has arisen, so they call in a backup team. Here female vehicles are added to the cast, which I appreciate. And these female vehicles aren’t feminized; they are not pink or purple, are not given long lashes, and are just as eager to work hard as the male vehicles. This second book seems almost a prequel story. The first book has about two pages of daytime activity then the vehicles go to bed. This second book focuses on the daytime work, but ends with the vehicles going to bed—with a shorter bedtime routine than in the first. Both texts are told in rhyme.

Lichtenheld uses bright colors, cartoonish faces that use primarily the windshields and front ends of the vehicles, and some creative layouts. Little details like teddy bears and nightlights make the pages extra fun. Some of the illustrations from the first book are reflected in the second.

I read first One Fish, Two Fish and then I tried Mr. Brown Can Moo. This book I read by popular request. I’d grabbed this too as a possibility, but it was a favorite of one family who told me they had been collecting the book in different languages, and a favorite with a few of the other members of my audience too. It’s a lot of fun to read aloud not only for the rhyming text but also for the emphatic tone that the protagonist uses in refusing to try green eggs and ham.  And of course, he does end up liking the new food after he tries it and ends up enthusiastic about eating it anytime, anywhere. 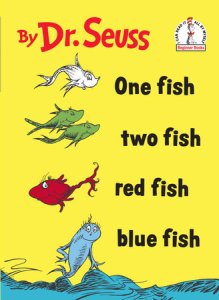 This story was so much longer than I remembered it being, and so much less of a story. It’s more like… snatches of poetry, some of it loosely connected, but most of it independent. Several of my favorite snatches of Seuss are in this collection, though: “One fish, two fish” of course but also “My hat is old, my tooth is gold.” Many of these poems are rhyming tongue twisters that would be good for helping kids laugh along while they learn to sound out words.

I remembered “Yertle the Turtle” as one of my favorites of Seuss’.  It must have left a profound impression on me.  I did not realize till I was partway through the story at a story time this past month just how relevant it is to today’s politics.  Because of that, this story twisted my stomach more than I had thought that it would, the king’s boasts and poor Mack’s complaints and protests sounding both all too familiar.  It was not the distant fable that I remembered.  It is lived reality.  It is now.  It is protest fiction.  But it was, I think, a fable.  “I know, up on top you are seeing great sights, but down here at the bottom we, too, should have rights.”  Oppression, a kingship built on the backs and forced labor of others cannot last forever.  Protest will be rewarded.  One lowly turtle on the very bottom can have an impact and a voice.  That voice, that rebellious act, that existence may topple a king.  When I’d finished, I sort of took a deep breath, and the mother of the child who’d requested one last story (she was about seven; I don’t know if she saw the real-world parallels as clearly as her mother and I did) and I shared a look, and sort of danced for a moment around saying how relevant the story seemed to today.  I did not read either of the other stories in this collection.  Just “Yertle.”  The other two stories in this collection are “Gertrude McFuzz” and “The Big Brag.”  “Yertle” is in other collections as well, including Six by Seuss.

Round by Joyce Sidman and illustrated by Taeeun Yoo. Houghton Mifflin Harcourt, 2017.

Joyce Sidman wowed me before with her book Before Morning illustrated by Beth Krommes. She has a unique way of seeing and describing the world. She is one of those writers that you can just tell pays attention to every word and every meaning and emotion of every word.  This book focuses on all things round: seeds, the sun, the moon, eggs, mushrooms tops, oranges, raindrops, ripples…. As it was with Krommes’ cover, it was Yoo’s cover illustration that drew me to this book, and it was only later that I realized I’d read and enjoyed another of Sidman’s works. Yoo uses a small child and her dog and a goose and a parent or other adult to interact with the round things that the narrator—an “I”—describes. Yoo’s human characters seem to be Asian, but I wouldn’t swear to it (though Kirkus Reviews agrees with me), and they are never given names or described themselves within the text.  She adds extra circles into the illustrations. The two artists together make a game of the book and a game of the world. Once you start seeing round as they see round its hard to un-see. Definitely the focus here is on nature. The final pages of the book describe some of the reasons so many things in nature are round in fairly simple terms—these pages are definitely more for the older picture book audience though, maybe 7-8 with an adult to explain some of her more difficult words in these explanations. 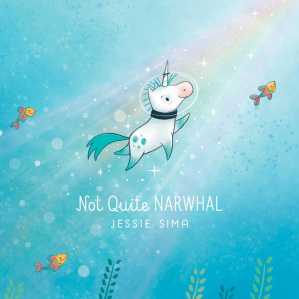 This is going to be one of my new favorite books, I’m fairly sure. Kelp is born and lives under the sea, but he isn’t like the narwhals—his horn isn’t as long, and he’s not as good a swimmer—but the other narwhals don’t seem to mind, so he tries not to mind either. But a current pulls him above the surface and far away he sees a creature that looks like himself. He learns how to walk, walks through a “strange and beautiful” land, and discovers unicorns—and that he himself is a unicorn. He learns all about being a unicorn, and loves it, but he misses his friends. He returns to them and in a conversation very much (it seemed to me) couched in the cultural script we have for “coming out” explains to his friends that he is not a narwhal but a unicorn. They all “t[ake] it very well” and knew he was not a narwhal but a unicorn all along. So Kelp begins to live as a unicorn who knows he’s a unicorn with the narwhals.  But Kelp soon begins to fret over whether he wants to be “a land narwhal with the unicorns or a sea unicorn with narwhals,” and finally finds a way to not have to choose between the two.

Perhaps because of the national dialogue right now, I saw this as very much about either gender or sexual identity; I couldn’t quite ever decide which metaphor worked better (the rainbows made me wonder if the unicorns represented gay culture, but the question over whether he was a land narwhal or sea unicorn or both/neither made me think more about trans identity).

Beyond all of that, the pictures are adorable! They are colorful and they are playful and creative.  This book is just wonderful.