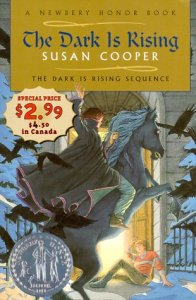 I found Susan Cooper’s The Dark Is Rising Sequence—wow—fourteen years ago? It was around the same time as that I was devouring J. K. Rowling’s Harry Potter series and Diana Wynne Jones’ Chronicles of Chrestomanci, after Patricia C. Wrede’s Enchanted Forest Chronicles.

That list alone should give you some idea of the genre and the intended audience—or an appropriate audience.

I don’t think I began to really understand its complexities and nuances until maybe four years ago (at the latest). I had always sort of imagined the Dark and the Light as synonymous with the Christian symbolism with which I was most familiar. “Your word is a lamp to my feet and a light to my path” (ESV Ps. 119:105) and “[…] the wicked shall be cut off in darkness, for not by might shall man prevail” (ESV 1 Sam. 2:9). I think it was the last book that I was reading, Silver on the Tree, when I realized that Cooper’s Light and Dark has very little to do with Christian ideology (and I think that I’d read one of Diane Duane’s Young Wizards series not long before, which is I think heavily influenced by Christian mythology, and seeing the two book series in contrast may have helped to make this revelation so jarring.)

God—the Judeo-Christian God, that is—or any other god for that matter, except perhaps Herne the Hunter, who might according to some theories have evolved from one of several pre-Christian gods—really doesn’t enter into Cooper’s story at all—as much as this book in the series happens around Christmas and the protagonist, Will Stanton, is raised in a Christian household. In Christian ideology, man cannot succeed, cannot be saved apart from God. In Cooper’s mythology, the Old Ones of the Light and the masters of the Dark are more than men, almost gods, and they rely on their own power and on men for success.  That is the starkest divide between Cooper’s mythology and Christian mythology—the source of might and of salvation and the reliance of men on God or gods on men.

Perhaps had I been raised outside of the Christian faith, I would have more fully understood Cooper’s ideas of the Dark and the Light sooner, maybe even when I first read them in middle school.

For all that I’m talking about this now, realize that as a child, I missed the nuance, I missed the replacement of God or any god with more-than-men-but-not-gods. I don’t discourage Christian parents from sharing this story with their children by any means. It’s an excellent story about the conflict of Good and Evil and demonstrates the perfectly human powers of teamwork, phileo love, persistence, and sacrifice needed to combat Evil, and it gives to Evil both a human face and an otherworldly face that I think is congruent with Christian beliefs.

That, again, being said: You may need to be ready to one day have this discussion with your child. They may like me be rocked to find on a reread that the book series that they loved as a child seems now like not the same series.

But this is a beautiful book series, excellently written, neither too poetic nor too prosaic. This book has been a favorite Christmas story for a long time.  I enjoyed rereading it, and I will do so again, probably come next Christmastime.

This review is not endorsed by Susan Cooper, Aladdin Paperbacks, or Simon & Schuster.  It is an independent, honest review by a reader.

The world of The Boggart is a smaller world of smaller problems and lesser fates than that of The Dark of Rising, however.  The modern world of The Boggart is also more modern than that of The Dark Is Rising, in fact having been written 15 years after The Silver on the Tree.  Technology and specifically computers evolved rapidly between the late 70s and the early 90s, and this evolution is reflected in the worlds and plots created by Cooper.

The emphasis on technology in The Boggart does date the book, as I have read other reviews complain, but I do not think that this is a fault of the book, however much I giggled at the Gang of Five’s excitement over the new font Garamond that they had pirated, and told them, perhaps aloud, “Just wait till you see Papyrus;” a dated book is not an irrelevant book.  As we grow more and more dependent on rapidly changing technology our books are going to be more and more rapidly dated, but we can still cheer Odysseus’ triumph over the suitors as much as we can Salander’s revenge on Bjurman (The Girl with the Dragon Tattoo, by Stieg Larsson, 2005).

The Boggart was a little slow to start.  I really wasn’t grabbed by the book till the Boggart started wrecking havoc in Toronto; then the Old began to mix with new technology and modern explanations and philosophy, and I was hooked.  A psychology student and fantasy-lover, I was especially interested by Dr. Stigmore’s misinterpretation of the Boggart as a “poltergeist manifestation,” a troubled child who develops telekinesis, an explosion of pent-up energy.  I’ve never heard this theory before but was glad to hear someone mention poltergeists as Cooper’s depiction of a boggart really read more to me like a poltergeist from all I know—but all I’ve known of boggarts previously is from Harry Potter, and that may not be the most reliable source (a quick bit of research makes me think that neither Cooper’s nor Rowling’s depictions are entirely true to legend, though Cooper’s, as I would expect, seems closer).

I was a little upset by the inclusion—however minor—of a romantic subplot.  It seemed unnecessary, there simply because a boy and girl can’t meet and be friends in fiction without feeling or wishing for something more.  However my own work might conform to this same idea, I wish it was a stereotype that we could overcome, and I think Cooper had a great opportunity to do so here.  However, romance and romantic feelings are a fact of life and young people are curious.  I will let the romantic subplot slide.  While Emily and Tommy might be interested in one another, at least no one accuses them of sexual practice, which is a whole other depth to this same stereotype.

As ever, Cooper’s command of language is wonderful with stunning imagery and well-chosen details that add to the story’s depth.

This review is not endorsed by Susan Cooper, Scholastic, or Margaret K McElderry Books, or Macmillan Publishing Company (the latter two of these own the original copyrights).  It is an independent, honest review by a reader.