I read a lot of picture books this January, and so I’ve decided to break the roundup into two parts.

The illustrations in this one are pretty fantastic, so detailed, so realistic—not just in style, but also in not whitewashing the neighborhood or the surrounding town.  Speaking of whitewashing, a reader on Goodreads commented about how this is an African American family—and that was the first that I’d taken notice of it.  This is an African American in a book with no social message or message of equality.  Better still, Jonathan Bean himself is not African American.  The story is every child’s experience of watching snow fall (and though it’s not explicitly stated in the story) waiting to see if the snow will be deep enough for snowy play like sledding.  It’s a story with which any child can empathize.  The mother distracts her son with household chores and baking.  The father comes home to play with him.  The only thing I can really complain about in this story is that the mother was home, cooking and cleaning, while the father was out at work—but isn’t that the typical American experience.  It would have been a nice choice to break the gender stereotype since Bean so nicely broke the whitewashed vision of the American family.  I do appreciate though that this is a family with both mother and father present and active and interested in the child’s life. 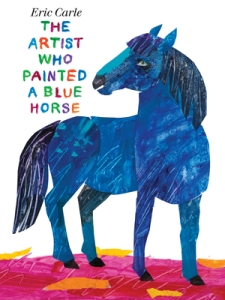 I think most people know Eric.  The Hungry Caterpillar left quite an imprint on my childhood, though not as great an imprint as did the illustrations of Bill Martin Jr.’s Brown Bear, Brown Bear, What Do You See? et al.  I was sadly unimpressed by The Artist Who Painted a Blue Horse.  The prose would have benefited from more zest, though I approve of Carle’s message that a good artist is not necessarily one who sticks to reality, promoting creative thinking and creativity, prompting children to put away enforced ideas of correct and incorrect.  At the same time that message seems self-aggrandizing even though the artist at the end of the book does not look like present-day Carle (it might be a boy Carle).

In retrospect, this was not a story I ought to have chosen for story hour.  It begins with two ladybugs who want to eat the same leafful of aphids.  Now aphid is a strange word, so I thought I had better explain it.  And then I realized what was going to happen to the aphids, and I wished that I hadn’t called them “baby bugs.”  And this whole story is about a ladybug that wants to fight—not exactly a great role model.  I tuned my voice to make the ladybug sound at least like it wanted to pick a fight for fun, for the challenge, the way a kid might ask, “You wanna race?”  In retrospect, I may have learned my lesson at least about screening Carle books before I take them to story hour.  As a story hour book too, the clocks in the top corner of the pages were nearly invisible to the children.  I explained where the hands were on the clock faces, at least at first, and was able to work that explanation pretty easily into the prose, but I didn’t really think any of them were there to learn to tell time and stopped after the first few pages.  Also, analog clocks are disappearing, though I think they are still more often in classrooms than digital clocks, so maybe it will be something that they’ll need to learn.  Reading this book makes me feel old.  Not only because of the analog clocks but also because of the political correctness that makes me wonder if such a violent little ladybug would have made it past an editor today.  The kids did pick up on Carle’s lesson that you shouldn’t be mean and that you should share, but it seemed like there were few pages on that.  Most of the pages were devoted instead to the grouchy ladybug asking larger and larger animals if they wanted to fight then dismissing each as too small—and I think at least one my kids was frustrated by the ladybug’s idiocy (she kept commenting that she was pretty sure this or that animal was large enough).  It made a better bestiary than a story it seemed to me as I read the same few words over and over with a slight variation.  That being said, that repetition can be very lulling.  I found it very easy to read and to play instead with my inflection than focus on the words when I was caught up in the repetition.

As a student and lover of children’s literature, I personally loved this book.  Some of the illustrations in this are amazing.  A lot of the memoirs are truly sweet and endear readers towards either the animal or the author.  Some of the poetry was humorous.  The book provided an interesting view into the minds and lives of some of my favorite illustrators.  The kids at my story hour were less enthralled.  I knew more of the illustrators than they did (many of them having not recently produced any bestsellers), and taken all together, this is a long book.  The eldest of my story hour friends was maybe eight.  Much beyond eight, it’s hard to see a child being thrilled with being read any picture book.  This book lacks the cohesion that can hold a younger child’s attention.  There’s not a story.  There’s no conflict.  The book includes flash memoirs, poetry, and cartoon panels of facts about octopi.  I think only the one (Nick Bruel’s) got a laugh out of any of my friends and that because of Bruel’s interaction with Bad Kitty, a familiar face for some of the kids, I’m sure, and the humor of Bruel’s entry.  Bruel’s didn’t read very well aloud, though, I thought.  There were so many individual panels and I don’t know how many of my friends were able to follow my eyes across the pages as I read. 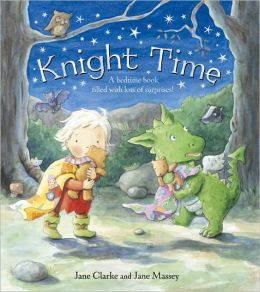 I loved this book, though I was biased towards it from the beginning as the cover was of an adorable towheaded young knight and a young dragon, each looking terrified into the dark forest.  Towheads and dragons, how could I not love this book?  It was cute in the way that I expected.  The knight fears dragons.  The dragon fears knights.  They meet and become friends after each seeing that the other is not so frightening.  I did not anticipate the inclusion of the knight’s and dragon’s fathers.  Both wander into the woods looking for their fathers and are each found by the other’s father.  The book is lift-a-flap.  If anything this made the book too interesting, too intriguing, too busy, but I loved that there was so much to look at and explore in this adventure.

I’ve never read the original Pout-Pout Fish so I think this book meant less to me than it is supposed to.  I think this would be fun to quote at young kids.  “Smile, Mr. Fish.  You look so down, with your glum-glum face and pout-pout frown.”  Followed immediately by, “Hey, Mr. Grumpy Gills.  When life gets you down do you know what you gotta do?”  I do dislike that the implication seems to be that a peck on the cheek by a strange should illicit a smile from someone who’s down.  I don’t really think that’s true, and I’m not sure it’s something that we should be teaching our children. 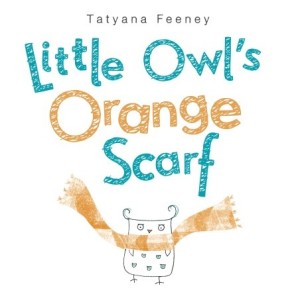 The trick is in the details with this one.  There’s a lot of humor from a careful inspection of Feeney’s illustrations, from the attempts of Little Owl to send his orange scarf to Peru to how he finally rids himself of the hated scarf.  While I sympathized with Little Owl’s plight and I really want to like this book even more than I do, I had a kid pipe up during story hour that he liked orange, and there’s was such sadness and hurt in his tone.  The scarf of course could be hated for being any color, and Feeney had to choose some color. There’s something so implicitly realistically childlike about Owl’s dislike of the scarf not only because it’s too long and scratchy but especially because it’s orange.  It reminds me of friends who hated and refused to wear anything pink simply for its color—and I’m glad that Feeney chose a color other than pink.  Pink would have seemed cliché.

This lift-a-flap book is all about insects and bugs—perfect the adventurous and outdoorsy child in your family.  Katz’s protagonists are not strictly male even though the book is about bugs.  Katz’s illustrations and the use of flaps are what really appealed to me in this book.  The insects peek out from behind foliage making it easy to see where a child being read too could be prompted for an answer to the questions that the text poses.  The colors are bright—as are all of Katz’s.  Rhymes help with the rhythm of the text.