I’ve already reviewed Dealing with Dragons (*****), the first book in Patricia C. Wrede’s Enchanted Forest Chronicles, for this site, and I think that review pretty thoroughly covered the wonderful feminism to be found in Cimorene’s and Kazul’s stories and more subtly in other characters’ within the Forest.

I am such a fan of these books, and after rereading that first and seeing that the love remained, I hurried out to buy for myself the entirety of the series, which I found collected into one volume by SFBC Fantasy.

I just finished rereading the rest of the series, one book after another, first Searching for Dragons, then Calling on Dragons, and last Talking to Dragons.

I did not realize till I’d nearly finished Talking to Dragons (**1/2) that though this is the last chronologically, it is actually the first of the books published by Wrede. This blows me away still because it proves what an enormous and twisted backstory Wrede had planned to get this one story finished—even if I think it would have felt somewhat poorly integrated into the text if I’d read Talking to Dragons first.

This last book is probably the least impressive to me—and so in that sense, I’m not surprised to learn that it was the first. It is the only book of the series written in the first person. Why for me first person has become such a taboo, I cannot say, but I am only just beginning to overcome my personal misgivings about the style. Sixteen-year-old Daystar narrates. One Goodreads reviewer managed to capture I think what bothers me about Daystar: Daystar lacks emotion and reaction. First person is best used to explore a character’s inmost emotions and reactions especially in characters who cannot or will not openly express themselves. It can also be used to write in a unique voice as Rick Riordan does with Percy Jackson. Daystar doesn’t have a particular interesting or amusing voice. He’s not anguished or surprised or overwhelmed by his task or by the enchanted of the Forest. The only reason for Daystar to narrate is to keep the reader as much in the dark as is Daystar. I can’t say there’s a better narrator than Daystar, just that I wish that Daystar was a better narrator.

Shiara, the fire-witch with whom Daystar partners because neither of them has a direction so they may as well wander directionlessly together, is not the flying-in-the-face-of-stereotypes heroine that wins me in the other books of the series. In fact, she is a stereotyped redhead, fiery in ever sense, easily upset—touchy I supposed you’d say—prone to yell and complain and be angry at the world and herself. So, all in all, the fourth book is a disappointment—unless you consider it the first book and marvel at how much planning Wrede has done to write this book.

Rewinding back now to the second book, Searching for Dragons (****): This book focuses on Mendenbar, the insular king of the Enchanted Forest, who would happily spend all his days alone in his kingdom. On a walk through the Forest, he discovers spots of dead earth that possess none of the Forest’s magic. There’s evidence that the damage may have been caused by dragons, but he is advised to visit Morwen for advice about dragons before acting, and then by Morwen to visit Kazul. Mendenbar finds Cimorene instead of Kazul at the cave, however, and she is just setting off on a solo quest to find the missing King of Dragons. Gallant hero that he is, Mendenbar cannot let Cimorene quest alone, especially when they are seeking the same person, and so the two set off together. They encounter a number of helper characters whom Cimorene and Mendenbar help in turn and who help to expand Wrede’s world beyond the dragons’ caves. The magician, Telemain, becomes a recurring character.

This book better explains the nature of magic—specifically the magic of the Enchanted Forest, wizards’ magic, and to a lesser extent magician’s magic—which is all types of learned magic.   Telemain explains magic and spellwork scientifically. Most of the other characters—notably Cimorene—can’t understand his heavily jargoned explanations, which have to be simplified by other characters. Kazul glares at him and threatens to eat him if he can’t talk sense. Kazul and Cimorene here sympathize with the child readers, but Telemain allows Wrede to speak to her adult audience as well. I appreciate these explanations as an adult, and as someone struggling to explain my own magic, I am doubly wowed by Wrede’s scientific understanding of her magic.

Importantly, though the book is told primarily from Mendenbar’s point of view, Cimorene is not discounted nor reduced to the subservient role. There are skills that Cimorene possesses that Mendenbar does not that make her invaluable—not her prowess in the kitchen or for housework but sensitivity to magic, knowledge about wizards, and a method of attack.

The escalating animosity between the wizards and the dragons climaxes to open battle in Calling on Dragons (****). The wizards capture the sword that helps Mendenbar control the magic of the Enchanted Forest and helps him keep the wizards out of it. Cimorene must go with Morwen, Telemain, Kazul, an enchanted rabbit named Killer, and several of Morwen’s cats to recapture it. This follows the same adventure story pattern as Searching for Dragons: Helper characters, small battles and small victories, and ultimately victory over the wizards—well, sort of. This book necessitates the fourth, Talking to Dragons, because it ends with the battle a bit unresolved.

Within this group, the women shine particularly. Killer is more often a nuisance than he is helpful—or is helpful only by stumbling across enchantments before the others do—and Telemain becomes incapacitated by overextending his help so that Morwen must save him, reversing the typical hero’s tale where the hero rescues a maiden.

This story comes to us primarily from the voice of Morwen, so the obstacles and solutions are particularly suited to her. Wrede proves herself an astute student of cats when she gives voice to Morwen’s.

I wonder about the climate in which this book was written (I am too young to have been at all aware and too lazy at the moment to do the research) because there is a great deal of blatant retort to those who might call for traditional works of fantasy here in the character of Arona Michelear Grinogian Vamist. It almost feels as if this book has been written in direct response to detractors of Wrede’s gender stereotype defying characters in other books. Wrede continues to play with the traditional, not only the hero tale and gender roles but several characters of other tales: Farmer MacDonald, Rapunzel, and a male fire-witch, proving that in Wrede’s world “witch” is not gendered anymore than is King or Queen in the dragons’.

Overall, I am a huge fan of this series. I find them well-written books and important counter-examples to the still all too prevalent damsel-in-distress princess tales told to children. Wrede’s women are for the most part very strong feminist characters, but none of them completely renounces their femininity, and in that I find them stronger, better role models for young girls. Wrede is conscious of the genre and conscious of the culture and aware of what is valuable and what could be improved or pruned from both.

I openly admire this series.

This review is not endorsed by Patricia C. Wrede; the original publishers: Jane Yolen, Jane Yolen Books, Harcourt Brace & Company; or The Science Fiction Book Club, SFBC.  It is an independent, honest review by a reader. 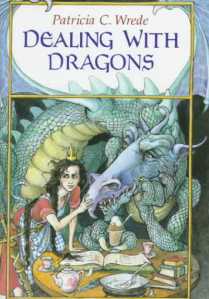 Why did I not remember the beautiful subversion of gender stereotypes in Patricia C. Wrede’s Dealing with Dragons when I was seeking a paper topic two summers ago?

Having reread this book after I couldn’t tell you how many years, I’m so glad that our local librarian placed this series into my hands when I was a young girl, and I hope that librarians, booksellers, teachers and parents are still putting it into the hands of young girls today.

Cimorene is easily bored by her proper princess lessons and sets up lessons for herself in fencing, magic, Latin, and cooking, each class ending when her parents find out about the infraction.  Knowing not what else to do with their daughter, the king and queen determine to marry her to a prince who boasts of battlefield prowess but displays little of this or any other admirable quality.

Cimorene takes the advice of a frog and finds herself in a cave full of dragons for whom she volunteers to act as a princess.  While her cherries jubilee and title greatly help her secure the position, the dragon Kazul is also glad of her ability to translate Latin.  Cimorene’s princess duties are mostly cleaning and organizing, stereotypically feminine activities, but with Kazul’s encouragement and knowledge and her own cleverness and initiative, Cimorene ultimately becomes a hero, saving a prince and at least one princess while wielding buckets of soapy water.

Her guides in this new life are also wise women.  There’s not a wise man in sight (yet), and sadly all of the villains are male.

Cimorene doesn’t spurn the entirety of her femininity even as she seeks masculine lessons and freedom, still engaging in such “feminine” work as cleaning, organizing, and cooking, choosing as her ultimate weapon a bucket of soapy water rather than the magic sword she briefly wields.  She never reneges the title of Princess.  She is not marked by her impressive physical prowess.  She does not have to be masculinized to become the hero, and I think it’s important that such role models be presented to our children.

Now, it might be that I am forcing some meaning where Wrede never intended it.  Because Cimorene does remain so feminine in her heroic role, it is possible that Cimorene’s true complaint about being a proper princess is less about the gender role forced upon her and more about the entitlement that others think ought to prevent her partaking in lessons that prepare her for a role as a household servant or advisor.  While cooking, cleaning, and organizing are all stereotyped feminine roles, they are also those assigned to a lower class than Princess.

But the dragons’ traditions makes me think that Wrede meant to comment on gender more than social roles.  The dragons always have a King and Queen (sadly, Kazul complains that the “feminine” role of Queen is dreadfully boring, an unnecessary slight perhaps or meant to align with Cimorene’s court experience), but these roles are not gender specific.  Kazul, a female dragon, wins the title of King for the remainder of the series.

Dragons are also able to choose their gender and this choice alters their physical makeup.  There’s much that could be explored there, but it is mentioned only once briefly in the novel.

This review is not endorsed by Patricia C. Wrede, Jane Yolen, Jane Yolen Books, or Harcourt Brace & Company.  It is an independent, honest review by a reader.

If you’re thinking of purchasing an e-reader copy of this book, why not support me and buy through Bookgrail?