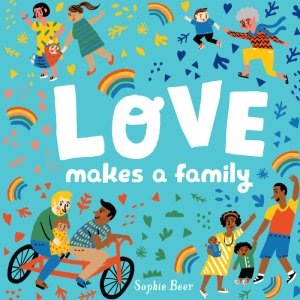 This little, brightly colored, riotously detailed board book depicts families of various make-ups (two dads, two moms, biracial families, grandparents raising grandchildren) doing the little, everyday things that express love, mostly spending quality time together—waking up early to children’s music, baking a birthday cake, splashing in puddles, helping retrieve a lost teddy bear, knowing where to find everything, watching a play. The refrain “love is” begins each page. This is a good reminder that love doesn’t have to be grand gestures, that love does not have to come just from biological parents or even from biological relatives.

This porcupine wants a hug, but no one wants to risk its spines. In rhyming question and response, the porcupine asks various named animals for a hug, only for them to run away or to tell it to leave. But they all come running back towards then past the porcupine, followed by a snake who laments that “all [it] did was ask for a kiss.” The book ends with the porcupine and snake cuddling one another.

Others on Goodreads have already pointed out the somewhat problematic nature of this porcupine who responds to the animals’ refusals by lamenting to the reader that “no one will hug me. That’s not very kind.” While I fully support teaching that it is okay to admit your needs for touch (many are touch-starved in a culture that teaches that physical touch can only be romantic and never platonic) and to request consensual physical contact, it is equally as important to accept a refusal without question and without resentment. Yes, the animals could have refused the porcupine’s request more kindly, but the fact of their refusal is as necessary and important as is the porcupine’s request.

The story seems cute, seems silly, but I don’t know that Blabey thought much about the message—I almost hope that he did not.  What is the message?  Everyone needs hugs and kisses?  Even that I disagree with, though I know we are in the 1% and grossly underrepresented in fiction.  (Any other aces reading this?)

I am glad that the two animals find what they need in one another though. It’s a sweet ending.

Emily Elizabeth and Clifford are visiting Clifford’s brother Nero (yes, Nero) at the firehouse, and a school group is visiting the firehouse. Nero demonstrates Stop Drop and Roll for the schoolchildren, and Clifford thinks that he can repeat the demonstration, but being so much larger, he rolls right on top of a street vendor’s cart. Clifford causes a little more trouble by clearing the streets for the fire truck when a siren calls the firemen away.  But he uses his unusual size and strength for good at the site of the fire, rescuing people from the upper floors of the building, helping to unreel the hose, and loosening the cap on the hydrant. This is an exciting and amusing way to teach the role of firefighters to children and the steps that firefighters need to take to put out a fire. In the back of the book is a list of fire safety tips.

There really are so many reasons to celebrate this marriage—and I do truly hope that it is a loving and fulfilling and lasting marriage for the two of them. I’m not immune to the excitement around this union that is shaking up the highest echelons of British monarchy. But this book focuses on the union from the point of view of Guy, the rescue beagle adopted by Meghan Mountbatten-Windsor, née Markle, now Duchess of Sussex, while she was living in the United States and is to told from Guy’s POV. Guy loves Meghan, but he isn’t fitting too well into the refined life of the family that she is planning to marry into—not with the children, not with the queen’s dogs, and certainly not with the queen. But on the wedding day, Guy catches the queen missing one of her own dogs and comforts her, earning him her acceptance at last and a spot in her limousine as they head off to the chapel to witness Meghan and Harry’s wedding. It’s a cute story about struggling to fit in, and I think its message could speak especially to kids joining new families or new social groups. Mostly though I think its appeal is in being based on a true rags-to-riches, Cinderella fairy tale, for both the duchess and her dog. 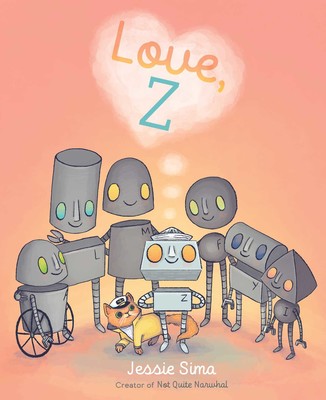 Jessie Sima is becoming one of my favorites. With a rather unique color palette, this tells the story of a robot finding a damaged letter in a bottle, of which only the signature “Love, Beatrice” is legible. Z doesn’t know what love is, but Z thinks that it might be important. For the first time ever, the older robots aren’t able to answer Z’s question; love “does not compute” for them either. Thus begins Z’s quest to find Beatrice, the only creature that Z is sure can tell the robot what “love” means. Z meets a collection of fun characters, including a cat who captains a boat and a multitude of characters happy to share what love means to them, including a black woman who runs a bakery and a schoolyard full of diverse children, including one girl in a wheelchair. Just as Z is about to give up, Z and the cat stumble upon Beatrice on her island. Beatrice invites them in. Z asks her about love, but Beatrice rather than giving Z a quick answer, bakes cookies and plays and dances with Z, demonstrating love I think. When she does answer, she tells Z what love feels like to her: safe and cozy and warm. Z’s family arrives at the door, worried about Z. Z realizes that Z has known love all along. Z feels the way that Beatrice describes love when Z’s concerned family tucks the robot into Beatrice’s borrowed bed, safe and cozy and warm. Z and Z’s family just had never had a name for the feeling before. Now they all know it as love. Z writes Beatrice a letter in a bottle before taking the cat’s boat back to home; the cat stays with Beatrice. There are so many stories left untold in this text, hinted at and left to be finished by the reader. Why did Beatrice send her letter by bottle? For whom was it meant? Very likely, knowing Sima’s other works, Beatrice letter is meant for the young, darker-skinned woman illustrated with her in her memory of feeling safe. Is she by any chance the same woman in the bakery? (I don’t think that’s likely; they don’t look much alike, but it would make a good story.) Why does the one girl in the schoolyard think that lawn gnomes are love? In a picture book with few words and few illustrations, Sima has managed to create a host of intriguing characters that feel tantalizingly distinct and real, the heroes of their own stories. I get the feeling that Sima might have backstories for them all, in much the way that J. K. Rowling does for many of the most minor characters in Harry Potter (fans have made up backstories for the rest of them). I did not catch that Z is left as agender, but others on Goodreads pointed out that detail, and I’ve gone back to change my review accordingly. That makes me wonder if the name Z is not just marking Z the youngest of the robots who are named things like L, Y, and I but also a shout-out to the agender ze/zir pronoun usage (ze being pronounced usually like Z).

These reviews are not endorsed by any of the authors or publishers or anyone else involved in the making of these books. They are independent, honest reviews by a reader.