I suffer from wanderlust. There is too much of this world that I have not seen—and really, I have seen more than many do. Around the time I went abroad in my junior year of college, I found TripAdvisor and enjoyed seeing the map slowly fill with places I’d been.

Recently, though I found Pinterest and of course in the intersection between searches for travel destinations and tips and home décor and do-it-yourself projects, I found the various ways that people track their travels across the globe. And I’ve wanted that—a physical tracker to display and to look at and dream. Well, within these past two weeks, I’ve tried two different ways of marking my travels on maps.

I originally wanted a globe with pins of my travels.

But they are very expensive.

My sister bought me a globe, but it is not cork, and I wasn’t able to push a pin into it. It’s still beautiful and excellent for dreaming of future travels. It looks so classy.

Later she found a cork map. I’ve seen cork maps marked very elegantly, and with such a map, one is not limited to pins that will still allow the globe to turn past its cradle.

That was the first map on which I was able to mark my travels. 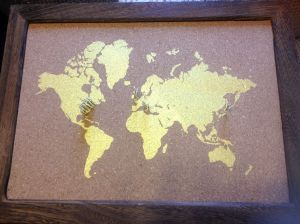 It’s not large, just about 9.5” x 14”. Australia is only 1.25” wide. I like how this one looks. With the pins, it looks like I’m fairly well traveled, but this map has no borders between countries and very little detail (Ireland seems to have been absorbed into the Great Britain).

I like it, but I wanted something that more accurately tracked my travels too.

I caught my roommate about to toss out a map sent to her by SmileTrain (I don’t know much about this charity, but since I’m using their map, I thought a shout-out was appropriate). 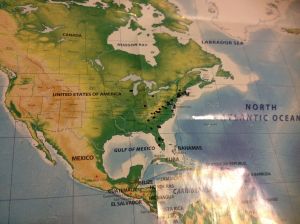 This one is 30.5” x 20.5”.  Australia is 3.25” wide. It does have borders between countries and between the states of the United States and the providences of Canada; Ireland is a separate island. Country capitols are marked with red stars. The more detailed coastlands make it easier still to determine the approximate placement of a city. I decided to mark each place I’d been not with a pin since I have no cork back on which to keep this map but with a purple Sharpie—purple because it’s my favorite color and soothing but also because it’s a color not used on the map. The Sharpie allows for more overlap than does a pin. There were a few marks that I made that I realized afterward were maybe a bit too far in one direction or another, and the Sharpie didn’t allow any second chances, so those marks had to stay, but because I was using so many fixed markers to determine the placement of cities, I was not very off, I don’t think, in any of my marks—always within the correct country or state at least.

I did not add any labels to this map, and I’m not sure if I will do, because I’m not sure how to do so without pins of some kind and because I rather think that even the smallest dangling tags could easily look messy and cluttered.  Though I do sort of love the idea, and it would be nice to be able to remember the cities’ names when time has passed. I expect even names inked onto the map would map it look cluttered quickly. Any examples of or thoughts on that?  I suppose I could do a legend off to the side, or maybe even write a list of places I’ve been in the white space of Antarctica….

(Obviously this is still a work in progress, and Word does not appreciate place names.)

This map makes me look much less well traveled, and that’s probably far more accurate. It shows the gaping gaps in my education and in my travels—from just skirting New Jersey to never having been in any country of the Americas except my own or in Africa or Australia.

The first map says to me “well done.” The second says “keep going.”

Of course the size contributes to that perception, but I think so too do the more accurate marks, where points like Perast and Kotor, Montenegro are almost on top of one another and the four places that I marked in the Iwate province of Japan look like a crooked line (and should really actually probably be more clustered than they are).

I expect I’ll keep them both, because my bedroom already would be the envy of a pirate captain—and not because it has a modern, cushioned bed—and because, you know, I’ve put in the work.

I don’t advocate one method of marking your travels over another—though I will say that size will effect your and others’ perceptions of your travels—but I thought I’d share what I’d learn from my own crafting.