First, let’s celebrate this little, dark-skinned scientist. Ada says nothing for three years, then asks so many questions: Why? What? How? When? And why again. Ada spends much of a book searching for the source of a terrible stink, which within the text she never discovers, though the illustrations hide the answer, I think, and asking kids what they think might be the cause of the stink might be a good way to engage an audience. Her parents become frustrated with all of her questions and experiments and the chaos that is “left in her wake”—messes in the kitchen and a stinky cat covered in perfumes and colognes. They send her to a thinking chair. Her parents calm down and come back to her to talk, and though she has scribbled all over the wall, they decide to help her instead of punish her—because these parents rock, and “that’s what you do when your kid has a passion and a heart that is true.” This is told with the same singsong and rhyme as Iggy Peck and Rosie Revere. 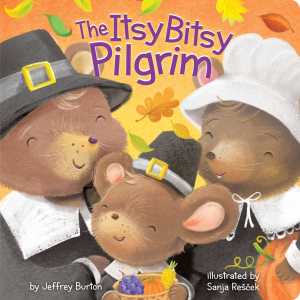 This book was… disappointing, though perhaps no worse than I would expect of a board book written for 2-4-year-olds. The illustrations are cute… but racially insensitive and clinging to stereotypes. The text is sugar-coated, saccharine, and white-washed. It pretends to be factual by dropping the name Mayflower but then undercuts itself by pretending that everything was sunshine and shared feasts between friends and that winter was no big deal. The text mimics the old rhyme “In 1492, Columbus sailed the ocean blue,” so it seems even less original than it could do. 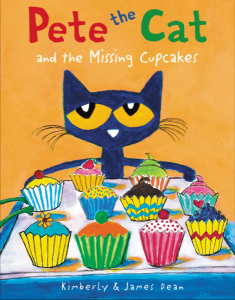 Pete the Cat and the Missing Cupcakes by Kimberly and James Dean. HarperCollins, 2016. Intended audience: Ages 4-8.

This Pete the Cat returns to Eric Litwin’s original primer model. There’s counting and math to be done. Pete and Gus are making cupcakes for a party, but the cupcakes are disappearing two by two. Who could behind it? Whomever it is, he keeps leaving behind clues. The illustrations could have been better here. I had to point out the sprinkles to my audience, who didn’t immediately recognize the dots on the ground as such and one of the kids had to point out to me that the colorful circles were cupcake wrappers. The footprints left behind by the culprit don’t look as much like his as I could have liked.

When the culprit is discovered he fesses up, Pete’s friends want to exclude him from their fun as punishment, but Pete—bold Pete—stands up for him and decrees that he deserves a second chance. So that’s another good lesson if it’s a little heavy-handed.

There’re fewer instances of 80s slang, and I’m not sure that there’s a way to insert a song into this book. 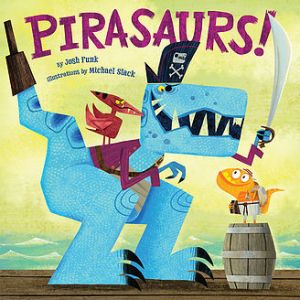 One poor, small, klutzy dinosaur wants to prove himself to his new crew and especially to his female captain, Rex, who isn’t forced into gendered clothing nor gendered roles or gendered stereotypes of really any kind. Packed with pirate puns, vibrant color, and action, this little dinosaur joins his mates on a quest for treasure—only for them to be attacked by another gang of pirasaurs, who have the missing piece of their map. The little dinosaur suggests that they share the map and share the treasure—and to his surprise, no one disagrees. He proves himself to his crew—to both crews—and does so through the power of his heart, through his notion to share. I read this aloud and found the text has a sort of singsong, pirate sea shanty quality. I added a few yo-hos and yar-hars. (Oh goodness, there’s a book trailer proving that the text ought to be sung). In college I threw in my lot with a band of pirates, and this book speaks to my pirate soul. 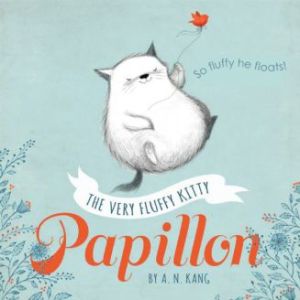 Papillion is a very fluffy kitty, so fluffy that he floats away if he isn’t wearing something to hold him down. He doesn’t like the outfits that his loving Miss Tilly makes for him though. One day when he is free of his clothes, he follows a bright red bird out of the window, past a bear’s cave, over swamps filled with crocodiles, till he gets all tangled up in vines. Everything is quite hazy and pastel, just light washes of watercolor, except for that speck of bright red bird. The bird comes back to help Papillon, the bird finds a home, and Papillon finds an outfit that he doesn’t mind wearing, that also keeps him grounded. It’s a win-win-win. The illustrations were adorable, clever, and beautifully rendered. I would like a little more from the text, but I can’t find anything specifically in it about which I would complain.

After Tek’s dad invents the Internet, Tek can’t be pulled away from the screens of his many devices, and his friends miss playing with him. Everyone on up to the Grand Poo-Bah of their tribe and the great volcano, Big Poppa, try to help to get Tek away from the screens. Ultimately, he has to be blasted away by the volcano, and once he wakes without his screens, he is astonished by the sun and the grass, the flora and the fauna. The style of this book is clever, the cover looking like a tablet, the first page looking like a lock screen, the top of each page illustrating the battery level of the “tablet” which decreases until Tek is shot from the volcano and his tablet crashes (pun, I’m sure intended), and the text above a picture having words in blue that might be links on a tablet screen that one could click for more information. These would be fun to use especially in a classroom setting, perhaps as assignments for projects. This is definitely a book with plenty of humor for the adults—perhaps too much so; I was a little concerned I would hear about the Flying Idontgiveadactyl. The heavy-handedness of the message kept me from enjoying the book as much as I might otherwise have done, but I definitely had a few giggles at the jokes that the kids would probably miss, like the Dinosaurs for a Better Tomorrow, and enjoyed the puns and the layout. 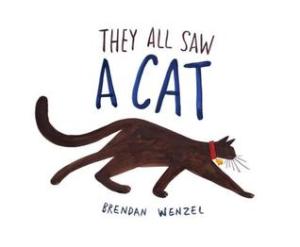 The text here while it has a sort of soothing rhythm that wasn’t keeping the attention of my audience: one less than a year and the other maybe 4 or 5. The pattern is essentially this: “The x saw A CAT. And the y saw A CAT. And the z saw A CAT. Yes, they all saw the cat. And the cat walked through the world, with its whiskers, ears, and paws.” I tried to get the older of the two to interact with and think about the illustrations. “Why might the fish be seeing the cat as sort of blurry and out of focus?” Reading now, I’m realizing I missed an opportunity to talk about perspective and assumptions and prejudice—albeit obliquely since these aren’t my kids and I can only step on so many toes. Next time though. This time I focused on the science of how each animal’s views of the cat. Perhaps my favorite illustration because it makes most clear what this book is doing is the illustration of the cat as seen by the snake, oranges, yellows, reds, and blues denoting heat signature, and it’s wonderful to see how cleverly Wenzel has illustrates echolocation and vibrations of the earth.

Some of the things that these dinosaurs consider are just awful, but then the things he does do are pretty wonderful. I worry that the take away from this book will more often be some wicked things that one could do if one is ever in a fight with a friend instead of what a person should do after a fight with a friend. I don’t know, that first half of the text just seems to have more imagination and vigor to it. But if the intended lesson is received, then it’s fabulous to give kids tools to make up after a fight. Mark Teague as usual is careful to include people of color in the illustrations behind the dinosaur protagonists.