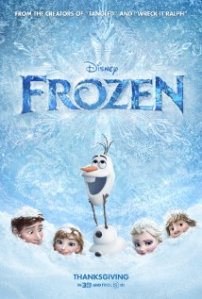 I found George R. R. Martin’s The Ice Dragon at a shop called Too Many Books and had to take it home with me because I was having a difficult time deciding whether or not Martin would be able to write children’s literature.  This high fantasy novella is probably meant for middle-grade readers.  It gets into none of the depth that A Song of Ice and Fire does, but the story remains a wartime story, with the battle not coming to the protagonist’s doorstep till the climax, but always with the growing threat of approaching armies and increasing numbers of soldiers passing through the village where the protagonist lives.  Its protagonist is young, seven at the novel’s climax, and Martin as he does within A Song of Ice and Fire remains relatively true to the childlike perceptions of his protagonist.

Martin handles this children’s book with the same flowery and abstracted prose with which he writes A Song of Ice and Fire.

It was impossible to watch Disney’s Frozen without thinking about this book (which is a good way to give this review a jumpstart: turn it into a paired book and film review).  Like Adara, Elsa is winter’s child, though she seems to have been born in summer (seeming to come of age and have her coronation in summer), which I find an interesting choice.  Like Adara, she is cold to touch and can interact with ice and snow in ways that others cannot.  Yet, while Adara is cold and removed, Elsa feels too strongly.  This seems to me to be a difference in the writer’s visions of winter.  Martin seems to see—or at least to write about—the winter of the medieval farmland, when plows are stilled and harvests are no more and all that can be done is to huddle by a fire and hope to survive to the spring and the planting while consuming the year’s harvest.  Disney saw the blizzard and the biting wind.

Martin’s ideal reader seems to be a younger child who feels like an outsider among peers for being too into his or her books and too reserved.  Such children undoubtedly exist and need literature that caters to them, so yes, I guess I would say that this is successful children’s literature, but I’m not sure it’s what I expected.  It’s more message than it is adventure.  I think I wanted an adventure, especially as I am used to expecting A Song of Ice and Fire from Martin, and it is difficult to draw any moral direction from A Song of Ice and Fire.

Adara loses her power when she begins to feel love, but in losing her power, she gains the love and acceptance of her family and her village.  The Ice Dragon‘s message is that you can be loved despite your distance from the world and that that which makes you different from others can be used to save others but also that you will be better loved if you do interact with the world at large and lose the chill of your power.

With love, Elsa learns to control her power and gains the acceptance of her family and kingdom as well as a crown and power of another kind, making Elsa seem at first the more empowered heroine.  However, Elsa’s power must be curbed to make her safe, while Adara is never a danger to others, just a puzzle.  I still think Disney’s is the better message to send to young girls because Martin’s story says that you will be loved better if powerless and Disney’s allows a heroine to keep her power and to wield it openly so long as she wields it with prudence and control, and prudence and control really ought to be used with power regardless of gender.

Before I close, a few brief notes about the illustrations of Yvonne Gilbert’s in Martin’s The Ice Dragon:  At first I was miffed to see that each chapter with the same illustration of dragonback battle, but I grew to really like the repetition of that image as an illustration of the constant but distant war that pervades Adara’s life.  Otherwise her illustrations are wonderfully detailed and expressive.