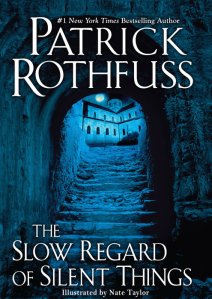 Patrick Rothfuss prefaces The Slow Regard of Silent Things by saying that this is not the third book in The Kingkiller Chronicles, that it’s not like his other books, and that “this book might not be for you.” He ends it by confessing his fears that this book would not be well received, that he thought this story would be unwanted by readers and editors

I didn’t jump on this book when it was first published (I unwisely thought that, having just finished Wise Man’s Fear a month earlier, I could patiently wait till the price dropped). I had friends to recommend the book to me before I bought it, and the criticism I was hearing about this book was primarily that it was not what the reader had expected (which usually I attribute to reader error more than author error—but having read the book, maybe just this once, it was at least partially the book’s fault).

This book was not what I expected because as Rothfuss himself says it’s not what you expect of a story; it has none of the framework that we’ve been taught to call “story.” As I read it, I kept waiting for it to become what I expected. It did not. The story is not cohesive. It does not have an arc. It is only loosely held together by an idea in Auri’s mind that she must find gifts for Kvothe before he next comes. The Slow Regard of Silent Things is a collection of vignettes more than anything perhaps and a tour of a world below the surface of the series that I’ve come to love.  This is exploration.

But it wasn’t the plots of The Kingkiller Chronicles books that caught me either, and the same wordsmith is here to tangle words together in creative new ways—now with a very different puppet. Kvothe (POV character of The Kingkiller Chronicles) is careful. Each word is weighed and measured and planned and meant to provoke a certain emotion and scene and image. He is, as he’ll remind you, Edema Ruh first, and the Ruh are performers and storytellers. I think Auri is actually the more reliable narrator. Maybe partially because Auri in this story has an audience she cannot manipulate. The silent universe judges her every move. She feels that judgment, knows when something is amiss, and she knows how to fix it, but she cannot put on a false face for the universe.

We’re told Auri is half-mad, but the method behind the madness, revealed when she becomes here a narrator, makes more sense than a lot of other worldviews. Auri moves through the universe sensing when things are off-balance and seeking to fix the imbalances, and to that purpose she seeks to lose self to All Else.

Rothfuss says that as he let friends and later others read the story, the feedback often amounted to “I don’t know what other people will think. They probably won’t like it. But I like it” (158). Rothfuss marvels at this and cites his empathy with her as the root of his fondness for Auri. “I cannot help but wonder how many of us walk through our lives, day after day, feeling slightly broken and alone, surrounded all the time by others who feel exactly the same way” (158). In some ways, this first reading, the endnote to this book made me feel more than did the book itself because it made all the rest make sense, and it was a rare glimpse into a writer’s fears and doubts.

Knowing now what this story is and is not, I’m looking forward to a second reading.

Read this story for the language, read it to ease a sense of loneliness, read it for a new perspective. Read it for meaning if you like but don’t expect to have the lessons handed to you Dumbledore-style. Expect to have to work for your meaning by examining one object and one sentence for several slow minutes and then letting it all flow together into a greater whole. Don’t read it as you read any other story. Don’t read it for plot. Don’t look for humor. Don’t expect a usual experience, and maybe you won’t be disappointed.

This review is not endorsed by Patrick Rothfuss, Nate Taylor, DAW Books, or Penguin Group, Inc.  It is an independent, honest review by a reader.

Day 17 the only thing that I did was waffle on the name “Bill” for an extremely minor character, a debate that has spilled over into day 18.  He may also end up being called “Sykes,” and I would like to ask you, my readers, for other suggestions.  This is a throwaway character.  His name is going to come up in this one conversation (I may even decide to call him by his title and skip his name) and never again.  If you’re a Dickens fan, you’ve probably already guessed the man’s profession:  “Bill” or “Sykes” or whatever he may be called is a pimp and a trader and a generally unpleasant fellow.  Because his is such a throwaway, I want to give him a name that hints at his profession.  Most of what I read, you’ll notice, is for a readership thankfully mostly ignorant of the existence of such people.  Let me ask then those of who read more adult books, who are some famous literary pimps?  There’s Pandarus, yes, but I don’t think that I want to use that name for my character.  That’s a little too obvious.  Can you name any more for me?  A little more digging has uncovered the possible names of “Harris” or “Derrick” (“Samuel” is too nice a name to waste on such a character.)  Voting open.  Thanks!

Usually the comments that I’ve left myself in previous edits I can now ignore, but today I stumbled across one questioning what material would be used to make the doors in my hollowed out mountain fortress.  Are they wooden or stone?  I’m really not sure, but I do need to know, or I suppose I need to know because I want to know if a knock on a door could be heard, though as my note said, I think that a metal knocker might make enough noise on even a stone door to make itself heard from the other side.  The question here is also whether the fortress’ makers would have been trying to create a comfortable atmosphere or if they’d have been more concerned with security.  All this makes me suspect that the doors are made of stone, in which case I may need to search for any reference to them as wooden, as being knocked upon, and maybe add some comments on the fact that the doors are made of stone, which would be a novelty for my protagonist, who lives in wooden cottage.  But what do you think?

A more major character is also changing his name.  I’ve been getting fed up with his name for a few days now, and now that I’m about to get to his scenes, it is time to start looking for a new name for him.  I think he’s settled on one because it is both a good and telling name and it will be an inside joke with myself and perhaps a few readers.

I got through a lot today.  I’m ending the day at 359 or 406.  I’m realizing that there is a day of training montage that may be unnecessary or that it might be possible to combine with the previous day’s montage.  I’m only stopping now because I need to give some serious thought to plot points, and I don’t want to get into that can of worms today.  47 more pages to edit in 12 days!  That’s only 4 pages a day.  That’s doable….  I have 139,325 words.