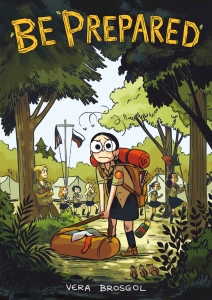 I think it speaks very well of Vera Brosgol’s autobiographical graphic novel Be Prepared that I stayed up late to finish this ARC the same night that I brought it home from the store. I think it speaks even more highly of it that more than three months later (how did I leave it for so long?) in reminding myself of the plot for this review, I ended up pretty much rereading the whole of the text without it feeling tired, even though I knew its twists and turns.

The novel plunged me into a perspective to which I really hadn’t given much thought, that of the immigrant Russian American—though the plight of the immigrant is something I think about often—especially just now. I know only a very little about any of Russian history—and what I have learnt has been more from British and Australian period dramas and Disney’s Anastasia than from classes where truth outweighed drama. Most of what I’ve learnt has been from the point too of view of the exiled aristocracy than the average Russian citizen.

But some things are universal: the desire to fit in with peers, the desire to have the best birthday party, the drama of adolescence and the struggle of adolescent friendships, particularly as teens begin to experience romantic attraction, the fear of and longing for stay-away summer camp….

Vera is the odd one out among her more affluent peers in Albany, an immigrant to America, having been born in Russia but immigrated before she turned five. Her mother’s peers are primarily Russian immigrants, fellow parishioners of their Russian Orthodox Church. Vera tries to throw a birthday party to match her classmates’, but her mother relies on gifts and help from the Church, leaving Vera with a party that is more Russian than she’d like. Her classmates leave in the night before the sleepover ends. All of her classmates head to camp during the summer, but Vera has never been allowed to go, the cost being too great. Upon discovering a Russian camp in Connecticut, a place where she won’t be the odd one out, she convinces her mother to accept the Church’s help to get Vera and her younger brother there.

But Vera still feels like the odd one out among the other campers. She is divided from her brother, put with the older of the camp groups in a cabin with two girls, five years her seniors, who have not only been going to the camp for twelve years but have shared a cabin for the whole of that time. The camp requires them to speak Russian as much as is possible, which isn’t a problem for Vera, but she does not read the language well, and she doesn’t know the camp customs.

After two weeks, the only friends that Vera feels that she has made are the chipmunks that she’s fed despite the rules—and even one of them has betrayed her by biting her.

But a chance encounter with a runaway guinea pig wins her a friend at last in Kira, a younger girl from another group. They admire one another, help one another to grow, and encourage one another. Together the two of them set out to conquer camp, to best the boys at last in the weekly capture-the-flag game.

This is a novel about being comfortable in your own skin and in the connections that you make, and about not judging on first impressions. From Vera’s belief in the true friendship of her classmates who abandon her, to her initial exile of Kira because she is younger and always crying over her missing guinea pig, to her belief that her brother is enjoying camp, initial impressions prove wrong again and again.

I enjoyed the pacing of this novel. I think Brosgol used some great tricks to keep the story going through periods of stagnation. At one point, a couple weeks of camp activities are expressed in a letter to her mother below the text of which the panels more honestly express Vera’s experiences at the camp. Moments of quiet contemplation are overlaid once by the action of swinging on a play set to give the panel some action. At others her thoughts are related to moments in Russian history, which were informative as well as informing the character.

The graphic novel is such a popular genre right now for middle grade readers, and I think readers will find this at once a relatable and unique perspective on feelings we’ve all had and experiences many of us might have shared.

This review is not endorsed by Vera Brosgol, Alec Longstreth, First Second, Roaring Brook Press, MacMillan Publishers, or Holtzbrinck Publishing Holding Limited Partnership.  It is an independent, honest review by a reader.