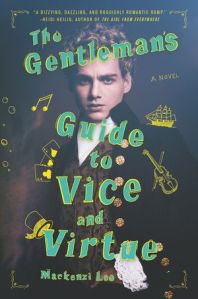 Having read and loved the second book in this series, The Lady’s Guide to Petticoats and Piracy, I knew I would go back to read the first. I expected this to leave off nearer to the beginning of the second, but it did not. I stand by my assertion that you can begin this series with the second. The two are really individual stories.

Little is said in this novel about Felicity’s childhood or what brings her to the Scottish bakery on which the second book opens.

This novel focuses on the elder Montague, the heir apparent, Henry “Monty” Montague. The book opens on the morning of Monty’s departure with his best friend Percy Newton on their Grand Tour, on which Monty’s younger sister, Felicity, is to accompany them a small part of the way on her way to finishing school in Marseilles.

But Monty’s father is determined that this should not be the dissolute last hooray that Monty hopes it to be. He assigns them a chaperone. He warns Monty that he will not embarrass the family and especially not be caught in any compromising situation with another man or he will not be allowed to return home to his position.

But Monty knows already that he has developed romantic feelings for Percy.

The three are not long on the Continent before the trouble begins.

Monty is caught sans trousers with a woman in the apartments of the duke of Bourbon, and the Montagues and Percy leave Versailles in a cloud of whispers.

That might have been smoothed over, but Monty’s idle fingers filch a valuable object that looks like a useless trinket from the duke’s desk.

Their carriage is waylaid by a violent group disguised as highwaymen on the road to Marseilles.

Separated from their carriage, their chaperone, and their possessions, the three teenagers stumble to Marseilles.

But the revelation of the fate that awaits Percy at the end of this tour—not law school as he has told the Montagues but an asylum where he is being committed because of his incurable epilepsy—makes Monty especially question the direction of their tour.

With much cajoling from Monty, the three are pulled off course, abandoning their chaperone and carriage and leaving with only the money that Monty is able to wheedle from a young bank teller on the strength of a silver tongue. Their sojourn in Barcelona introduces an element of magic into the story.

The tour becomes a quest—a race against the duke of Bourbon—to retrieve a possible panacea (making this a particularly poignant read just now; who doesn’t want access to a panacea?) that Monty hopes will cure Percy, free him from the institution, and make it easier for the two of them to somehow be together—even if Monty isn’t at all sure what a happy ending with Percy could possibly look like in a world that expects him to step into the role of an earl and produce heirs of his own to continue the aristocratic line.

This book had everything that I wanted. It was an exciting adventure novel with pirates and swordplay and magic and music and mystery. And it dealt with contemporary issues well. Monty struggles with the world’s reaction and his own reaction to his bisexuality and is deeply effected by the parental abuse that he has suffered. Poor Percy struggles not only with the world’s reaction to his epilepsy but also to his mixed race heritage, the racism of white Europeans towards his darker complexion. Felicity fights against sexism and the future that society has planned for her—a loveless marriage and a life of minding house (her struggles especially are further explored in the second book).

The book is weighted by angst that helps to balance the swashbuckling and dissolution of the external journey that the characters take.

As the world went sideways and everything here in the US began to shut down, I handed this book to a number of customers (enough that we sold through our stock in paper- and hardback) as just a fun, action/adventure, and a way to visit faraway places without leaving the safety of the house.

Right now I am unable to return the library’s copy. I may just have to read it again.  I have already re-read parts of it, particularly the ending.

I hope that the third book comes out on schedule this summer so that I can spend some more time with this writer, Monty, and the Goblin.

This review is not endorsed by Mackenzi Lee, Katherine Tegen Books, or HarperCollins Publishers. It is an independent, honest review by a reader.