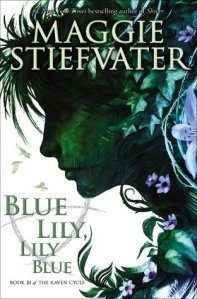 This book… I struggled through a little bit. And I don’t know why. I don’t know what caused it. But I suspect the fault is somehow mine and not the book’s. It took me more than a month. I started it sometime around January 9 and didn’t finish till February 16, and you see how long it’s taken me to even begin the review. I love Maggie Steifvater’s writing no less. I love Henrietta and its surrounding settlements and wilds no less. I love these characters no less, and I may have found new favorites in this book. (“She drifted toward the bedroom, on her way to have a bath or take a nap or start a war.” That’s the moment I decided I would love this character despite her very glaring faults. And then of course “I AM JESSE DITTLEY. DID YOU NEVER EAT YOUR GREENS?” Maybe not as many of them as I should have done, Jesse, and I’m sorry, Jesse.) I still sent a flurry of photographs of fantastic quotes that spoke to me to my friend Gwen at Apprentice, Never Master (or at least took the pictures. Did I send them to you, Gwen?).

I don’t know why it took me so long.

This book does not so narrowly focus on a single one of the quintet the way that Dream Thieves did. We are given glimpses into each character’s psyche, though perhaps Blue’s and Adam’s most vividly as each has a more personal quest (or two) here that intersects with the search for Glendower.

This story is about madness and sanity. This is about magic and mundane, past and present and future. It is about the line and the crossover between these “divisions.”

This is about friendship and family and love: the different expressions of each, the irrevocability of each, the growth and loss of each.

Like in the last book, the prologue is creatively laid out. There are three parts and three perspectives to the prologue: Above, Between, Below. This pattern was not repeated in the epilogue, and I was a little surprised and upset that it did not—but not really, because the epilogue. Three has always been and is explicitly an important number for this story. Which makes me wonder and worry about the five in our quintet. One of whom, I suppose, is already dead, so four. That’s still one too many, but I suppose if the prophecy of book one cannot be outrun or outmaneuvered: three. Oh gosh! Is this a series about winnowing down to three, about the sacrifices necessary to make three?

As I’m sitting down to write this review, and skimming back through the book, and thinking about all that I read, I’m falling more in love with this book. I really can’t wait to finish this series so that I can reread this series (one more book to go!).  It didn’t hurt me as much as the previous book did do, but the quest moves forward, and the players advance, coming out of the shadows.  This might be a set-up book, but I expect the final moves of the game will be bone-chilling in the best way.

Update: I stumbled back into The Raven Boys after writing this review, and that book at least is every bit as magical and wonderful and relaxing and awe-inspiring to re-read as I hoped it would be.

This review is not endorsed by Maggie Stiefvater or Scholastic, Inc.  It is an independent, honest review by a reader.