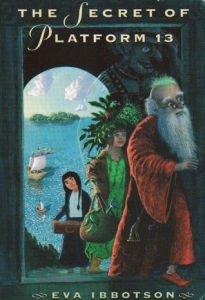 I have a feeling this might be a month for old friends. I don’t know when I first read Eva Ibbotson’s The Secret of Platform 13. I don’t know how many times I’ve read it since then. I do know that it was the first of her books that I read and the first of hers that I loved, the one on the merit of which I picked up the next, and the next.

Rereading it now was a very interesting experience. I couldn’t remember all the pieces, but one detail or another would remind me of what was coming, or remind me of parts of what was coming, so that reading the story became more like stringing old bits of memory together, finding the missing negatives in a string of photographs (too dated a metaphor?).

This was published three years before Harry Potter and I think it needs to be said that one can raise an eyebrow and expect that Rowling might’ve found this book too. An entrance to a secret world is found on an abandoned train platform, known by only some and particularly to those affiliated with magic. Raymond and Dudley share a great many things, including a penchant for perfect knickerbocker glories and a tendency to pitch a noisy fit when their desserts are anything less that perfect. Mrs. Trottle dotes on her Raymond as fiercely as Petunia Dursley does her Dudley, but the similarities fairly end there. Ben is the special boy neglected by his caretakers, but Ben is taken in happily (at first) while Harry is an unexpected, unwanted burden on the Dursleys. Ben is among other servants in basement quarters where Harry is shoved into the closet like a broom.

Eva Ibbotson has expressed approval of Rowling and her series, wisely saying “we all borrow from each other as writers,” but I haven’t found any comments from Rowling on Ibbotson.

After the kidnapping of a young prince, when the opportunity of rescue comes nine years later, a humble and kindly king and queen choose unlikely heroes for their son’s retrieval: a fey who is kind to everyone; an ancient wizard whose robes are covered in bits of old, dried spaghetti; a gentle, sensitive, yodeling shepherd who happens to be a tall and strong ogre; and a twelve year old hag who wins herself a seat among the rescuers by suggesting a gift for the prince to lure him back—a creature native to their Island that resembles a baby harp seal that loves nothing more than music. They meet a boy they think is the prince who turns out to be a servant among the household, but are drawn to his ease among strangers and magic, humility, will to please, and loyalty. The boy they think they’re supposed to bring back to the Island is spoilt in the worst degree, greedy, and selfish. This book nods towards high-action, especially at the end when elaborate heists are planned and assassins must be fought to defend a harmless, magical creature, but ultimately the heroes are kindness and friendship not pride or greed or wealth. Like all of Ibbotson’s books, it seems, the good guys are starkly contrasted with the bad and goodness is rewarded with a happy ending. Ending as they do, and being written for a younger audience so that the pacing is quick, the text is short, and the language is not particularly challenging, Ibbotson’s novels—and particularly this one with which I have such a long history—are comfort reads, excellent for stressful weeks and sick days.

This review is not endorsed by Eva Ibbotson, her estate, Sue Porter, Scholastic, Puffin Books, or Penguin Group.  It is an independent, honest review by a reader.