A note.  It’s been just over a month since my last update to this blog.  For that, I apologize; life just became too chaotic for me to update.  I am beginning now to piece my life back together and regain some semblance of organization and relaxation.  I have had, though, two reviews sitting partially done for a while in my drafts box: this and one more.  These two I want up on the blog sooner rather than later.  I will post them regardless of it being a Tuesday.  Look for Nine Pages to return to its regular schedule soon.

Meet the latest in Dewdney’s Llama Llama family. Llama Llama is spending a night at his grandparents’ house. After all the fun, when Llama Llama is getting ready for bed, he realizes that he has forgotten his stuffy in his mother’s car, but Grandpa is ready with a beloved stuffy of his own to keep Llama Llama company in the night. Told in the series’ usual singsong rhyme and rhythm and with illustrations I’ve not appreciated enough before, I’ve been able already to put this book into the hands of many grandparents as the perfect gift for grandkids because it is part of a popular series, expresses grandparents’ love for their grandkids, and is new enough that it is unlikely to be a book that the grandkids already have. Just an adorable book, really. It so truly captures the waffling of that first night away from home. 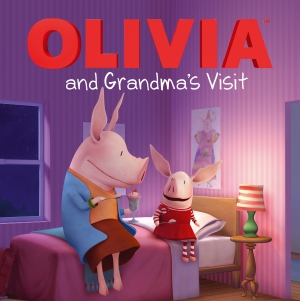 With Grandparents’ Day falling as it does in September, I suppose it ought to be unsurprising to have two grandparents’ visit-themed books in this roundup, but I admit myself surprised. This one is an older book that I stumbled across only because a grandparent whose grandchild loves Olivia asked about it. This time Grandma is coming to visit Olivia, and Olivia is being told that she must give up her room and share her brother’s for Grandma’s comfort. Olivia is not pleased. She doesn’t want to sleep in her brother’s room. It smells funny, and she thought that she’d get to share with Grandma. She tries several times to get back into her own room, and her insightful Grandma detects her desire and hesitation and invites Olivia back into the bedroom herself, favoring Olivia with an ice cream sundae. Olivia then learns that Mom is always right when she is chased out of her room and into her brother’s by Grandma’s snores. This plot packs in a lot of life lessons: about sharing, about family, about obedience, about trust, about cultivating a positive outlook. Something about it left a niggling doubt in my mind. Maybe I felt that Olivia was somehow rewarded for her attempts to wheedle her way back into her room when Grandma treats her to an ice cream and some special attention. Maybe I felt like not enough time was spent on how she ought to treat her brother or not enough was said about how she was treating her brother poorly. This book is based off of the Olivia TV series, which is an offspring of the original book series by Ian Falconer. I wonder how the plot plays out in a 15-minute episode instead of as a picture book, if these things that bothered me would be dealt with or be dealt with differently so that they bother me less. 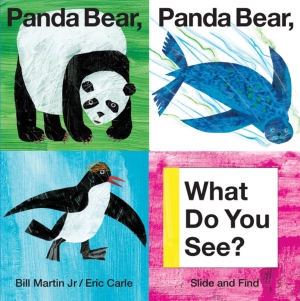 Panda Bear, Panda Bear, What Do You See? is very much like Brown Bear, Brown Bear, What Do You See?, written and illustrated by the same pair. It uses the same pattern. The edition that I read uses sliding panels to reveal the animal seen on the next page before turning the page. The sliding panels were a big hit with my young story hour crowd. I’m not sure, however, that the sliding panels actually help tell the story any better. One of my eager listeners, excited to be taking part, kept sliding the panels before I could read the sentences printed on them. The book being written in a certain pattern though, it was easy enough to guess at the text. What might have been fun is to reveal just a bit of the animal on the next page, have my listeners guess or tell me what they could about the animal. This book more than Brown Bear, Brown Bear uses obscure animals: a whooping crane, a macaroni penguin…. Carle’s illustration of the dreaming child was an interesting choice too. The child looks only vaguely humanoid. I would have better believed it to be a moon than a child. By the time we arrived at the dreaming child, though, I’d lost the attention of most of my audience, so no one really batted an eye at it but the parents and I.

This book is a play off of Giles Andreae’s Giraffes Can’t Dance, also illustrated by Parker-Rees. Instead of African animals gathering for a dance, it is a group of dinosaurs meeting in the sludgy old swamp. The text rhymes and repeats the phrase “Shake, shake shudder… near the sludgy old swamp. The dinosaurs are coming. Get ready to romp,” which easily becomes singsong, which is perfect for its dance-themed plot. Given time I’d learn to read the whole of the book in that same cadence. This book is not as easily dance-along as, say, Sandra Boynton’s Barnyard Dance, but it has the potential to be dance-along nonetheless with the descriptions of dinosaurs twirling and stomping. There are a lot of onomatopoeias in the text that make it even more fun to read aloud. Some less familiar dinosaurs (like deinosuchus) appear beside the more familiar triceratops and tyrannosaurus rex, so be prepared or prepare to stumble; I did stumble, but I think that I hid it decently. Small facts can be gleaned about the dinosaurs from the text and pictures. The tyrannosaurus does frighten the other dinosaurs and may frighten a few children, but he only wants to dance too. This book I came to read because a young would-be paleontologist asked for a dinosaur book, and I wanted something that would be fun enough to keep the interest of my other listeners but factual enough to please him.

Max knows that cats chase mice, but Max isn’t sure what a mouse looks like. A la Are You My Mother? Max asks different characters that he encounters if they are mice. They are not, and the mouse tells Max that he is a monster and that Mouse is asleep just over there. Turning the page reveals an actual monster—big, green, and hairy with sharp teeth in a wide mouth—which Max mistakes for a mouse, antagonizes, and is swallowed by. Afterwards, Max only chases mice, which he has been taught by Mouse are “monsters.” I enjoyed this story. I enjoyed this precious, precocious kitten. I enjoyed a story of a cat that believes it is chasing monsters. But I also recognize, that long term, this book hasn’t really got a lot going for it. It’s a fun book and it will remain a fun book, but I don’t think that it’s original or stand-outish enough that we’ll have many people asking for it or remembering it beyond Barnes & Noble’s promotion of it.

A fly leaves the sunny outdoors and lands inside “on top of the world” (a globe), but from there he is sucked up by a vacuum and goes through the stages of grief as he believes his life is over. There is a place for this book. This may even be a helpful book for grieving children. When reading it aloud, I skipped the section headings that list the stages of grief, and doing so I think gave the book a better flow and made the book more appropriate for a general audience, making the educational aspect of this picture book more subtle. There are very few books for kids about death or grieving and even fewer of those that deal with the grief in an unobtrusive way or broad way (most will make direct references to death and to grieving and it being okay to grieve), and so I think this is one that I may recommend to customers in the future when they need a book for grieving children. Outside of the context of grieving, this is an odd book and a harder sell. Flies aren’t the sort of protagonists that one readily attaches too (though there is a popular Fly Guy series by Tedd Arnold), though Watt does give the fly a bold and memorable and relatable voice, rather like Mo Willems’ Pigeon. Fly’s dialogue is generously emotive, which makes it fun to read aloud. The illustrations especially I think have some clever details for parents.