The 22nd was a travel day. We got on the train in Koma, switched to the shinkansen in Morioka and rode it to Kyoto. 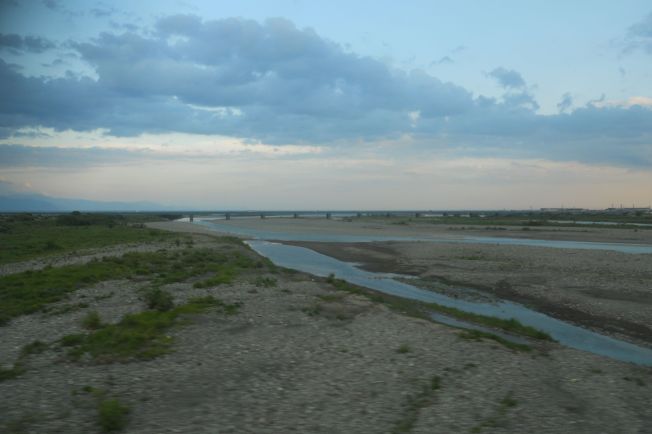 We crossed several rivers like this, wide and shallow, though I don’t think that these were the mouths of rivers.  Perhaps they were.  I spied the sea several times from the train windows, though I never could get a pictures of it.  I showed itself only in flashes, past cities and towns that soon themselves disappeared behind steep mountainsides.

A full day of travel and an unfamiliar city leaves one pretty disoriented, and though Kari had looked at the map, and we’d both seen that it ought to be pretty easy to find our hostel, we had the look of tourists—and not just because we were lighter-haired than the majority of the population.

Another cherished memory of the goodness of people remains a boy maybe our age who, while we were looking at a map, went out of his way to come up to ask if we needed help—in English even. He pointed us in the right direction then sped back the way that he had come, which is how I know that he changed his course to help us.

Our hostel, Hostel Kanouya, was in a traditional style house down a quiet side street surrounded by other traditional homes. The owner of the hostel greeted us and helped us up a very steep set of stairs to our room. The area was wide. It was only the two of us, so there was room for both futons and a small table with comfortable floor chairs.

Having settled ourselves and our bags a bit, we went out in search of dinner, and found a nearby restaurant nearer the traditional Japanese style. We took off our shoes and settled onto seats that let our feet hang into almost a trough below the countertop. It was late. There was only one other patron in the restaurant, a middle-aged man, who seemed to be friends with the restaurant’s owner. They were chatting amiably while he ate his dinner. We ordered a favorite of Kari’s, Kansai-style okonomiyaki, which Kari described to me as something like a hearty Japanese pancake, but I would say is some wonderful combination of hash browns and omelets with several sauces drizzled over it as well as red ginger to give it a really delicious and pleasantly varied zing. While our hostess mixed ingredients and cooked the okonomiyaki on the hot griddle that ran the length of the countertop, she kept chatting with her friend, and I let my attention wander to the crime drama that was playing on the TV beside us. Kari and the two friends exchanged eager questions and answers while I smiled and bobbed my head and waved hello when introduced.

It was a wonderfully pleasant way to end the evening.

All photographs are mine.  Click to see them larger.  All maps are made using Google Maps.