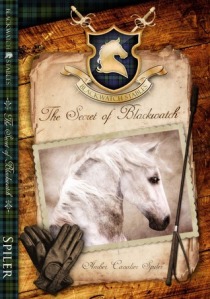 Amber Cavalier Spiler understands the deep bond that can form between human and horse.  In her new middle-grade series, Blackwatch Stables, the girls of Blackwatch can hear their horses’ voices in their heads.  The girls of Blackwatch are descendents of families that have unusually deep bonds with the spirits of particular horses.  The spirits of those horses always find their girls.  The girls of Blackwatch are one of several stables whose riders have this unique bond with their horses.  Then there is at least one rogue stable.  When the heart of a rider with this bond to his horse turns cruel and hard, so does the horse, and these horses become dragons.  I love the concept of horses with a connection to cruel riders becoming dragons.  It explains so much of dragon-rider literature.  First, that dragons can be ridden, also the nearness of many of these tales to “horse stories” (see Anne McCaffrey or Chris Paolini and compare to Walter Farley or Marguerite Henry, though admittedly the dragons in these tales can often be ridden for good), and last the question that I came across on the Internet: “Why are the bad guys’ horses always menacing and demonic too?”

The first book in the series, The Secret of Blackwatch, did not delve into the sort of depth that I would have liked either in creating rounded characters or explaining the magic with which the story is infused.

This book started a bit slowly.  The protagonist, Maggie, has lost her mother, and her dad, wanting to see his daughter smile again, decides to give her both lessons and a pony.  At auction, a dirty gray belligerently insists on Maggie’s attention in the pen.  This is the pony that Maggie sends to Blackwatch.  Maggie spends a lot of time learning the finicky rules of Ms. Cavalieri’s stable before the magic begins.  Ms. Cavalieri runs her stable as a military encampment at war rather than a stable—which thanks to the fantastical elements of this story, it is.  I attended a stable that was run more like summer camp year round except that we had fewer hands year round and were more responsible for mucking fields in the other seasons.  Helmets were insisted upon as they should always be, but while proper riding boots and pants or chaps were recommended, we could get away with jeans and sneakers on occasion.  Braids, jackets, shirts (not a uniform but just a button down with a high collar), and spotless ponies were for show days only.  Tall boots were never worn.  The girls of Blackwatch as consequence remind me of the girls who always looked down their noses at our stable, and so I think that I was prejudiced against them from the get-go, the girls didn’t really become rounded enough to earn reprieves.  I’m intrigued more by the adult riders, who seem now to have more secrets.  I fear Spiler fell victim as so many have done to the perils of school stories: a necessarily huge cast overwhelming of the author and making it difficult to give any character—let alone all of the characters—depth.

The dragon-riders who have retreated to a hollow mountain fortress are at war with the stables that still have horses instead of dragons.  The reasons for this war are not explained, though I suspect that they are personal and have more to do with jealousy and broken hearts than any gainful objective.  It is implied that Maggie’s mother and a parent of each of the girls in the stable have been killed in this war.  Maggie and her friend Katie discover the parents’ horses penned in the mountain.  Maggie is able to communicate with her mother’s horse, who presumably shares a soul with Maggie’s horse Bella.  How this soul is passed is not explained.  The horses are not of the same breed, but look similar, sharing markings and coloring.  I would have assumed the soul would pass on death and was very surprised when Maggie discovered her mother’s horse alive.

Stylistically, at times, it was evident that this is both Spiler’s first novel and one that was self-published.  The protagonist’s physical description and back-story were shoved mercilessly into the beginning and not worked into the text.  Physical details were often not mentioned a second time, making them forgettable, and unsurprisingly, the horses were better described than the people.  Spiler kept Maggie at a distance increased greatly by the use of Maggie’s father name, a detail that, though Maggie would obviously know, she would not likely use in thinking or speaking about him.  Though Maggie was very clearly the only POV character and it was supposed to be Maggie’s story, I felt as if I never got to know Maggie.  The narration seemed to brushed light fingers over “her gray matter but never took me into the squishy parts” as I just explained to a friend.

Through all of these rather common stumbles, I thought that the concepts of The Secret of Blackwatch were all good ones if I’d have liked them to be a bit better explained and executed.  I hope future books will expound upon and make clear the purposes of this war.  I hope we will learn more about the workings of this universe and magic.

This review is not endorsed by Amber Cavalier Spiler or BookLogix.  It is an independent, honest review by a reader.

I won a copy of The Secret of Blackwatch thorough Goodreads‘ giveaways.