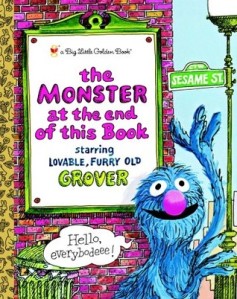 Rereading an old favorite picture book for the first time in a long time, I have realized that I have a type.  Two of my all-time favorite picture books are The Monster at the End of This Book, a Sesame Street book by Jon Stone, and We Are in a Book!, an Elephant and Piggie book by Mo Willems.  Both of these books break the 4th wall, the wall that ordinarily divides the fictional story and the real audience.

Grover, the protagonist of The Monster at the End of the Book, interacts with both the audience and the book itself, attempting to tie the pages together or build a brick wall to weigh barricade the next page while pleading with the reader not to turn the page because every turned page brings the reader and Grover nearer to the end of the book where a monster waits, and Grover has a terrible fear of monsters.

We Are in a Book! begins with Elephant Gerald’s realization that he and his friend Piggie are being watched, at which point Piggie investigates, coming to the “front” of the page that is their stage to peer out of the book at the audience.  They interact with the pages, turning the corners to see how many pages are left, noticing the text on the pages.  They play with the reader, making the reader say silly words like “Banana” because they realize that they can do so as characters being read.

One of the advantages of this 4th wall breakage is that there is a direct interaction between character and reader, and a feeling of familiarity and casual conversation develops because of that that cannot be achieved when the 4th wall remains intact, however much a reader may empathize with a character.  There is a different skill in sympathizing with a character in conversation with you and empathizing with a character that is indifferent to you.  Both are skills that need to be acquired, but there are fewer books that help young readers with the first skill.  Stone’s and Willem’s books give readers a chance to practice at understanding another’s feelings in a conversation without the danger of human unpredictability.

These are both playful books with twist endings that turn horror into delight.  Both books deal with characters’ (and by extension the readers’) anxiety about what happens when the book ends.  Elephant Gerald and Piggie celebrate that a book can be turned over and begun again.  Grover celebrates twist endings and plays with the concept of fear built up by a novel’s plot.

These are books that make me laugh.  There’s an intelligence to them that makes them as fun for parents or babysitters reading to young children as to the young children themselves.  I was introduced to The Monster at the End of This Book by a toddler for whom I was babysitting.  He had me read it to him again and again, and I loved it each time, though the surprise was gone after the first time.  As far as I’m concerned, any book for any age that can be enjoyed again and again, even with consecutive readings must be fantastic.  I’ve read We Are in a Book! several times too, and show it to every friend that I can.

This review is not endorsed by Jon Stone or Mo Willems, Sesame Street, Golden Books or Random House, Inc, Hyperion or Disney Books.  It is an independent, honest review by a reader.

More Bookish Photos From Me 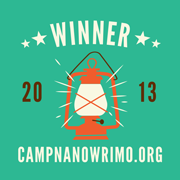 Soul of a Seeker

"We were given appetites, not to consume the world and forget it, but to taste its goodness and hunger to make it great." Robert Farrar Capon