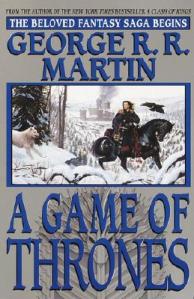 Coming late as usual to the party, I’ve just finished the first book in A Song of Ice and Fire by George R. R. Martin, A Game of Thrones.  You may have noticed if you’ve been following this blog, or if you scan down the entries, that I don’t frequent adult fantasy.  I have just not found myself as drawn to adult heroes as I have to those working beneath the noses of adults and on a curfew or those just coming of age and discovering themselves while saving the world.  Perhaps that makes A Game of Thrones a great introduction to adult fantasy for me and others who usually don’t read above teen level.  Many of the heroes of A Game of Thrones are not adults.

Rickon Stark, the youngest of his siblings, is only three, and his next oldest brother, Bran, [SPOILER] now heir to Winterfell, [END SPOILER] is younger than nine.  Danaerys (Dany) Targaryen, whom I expect to be a major player in this deadly game, is in her early teens, just developing the curves of womanhood.  Robb Stark, [SPOILER] Lord of Winterfell, [END SPOILER] and another major player in the game, is only fourteen.  These last two easily fall into the age range of heroes about whom I usually read; the other two are actually younger, though Bran, who is one of several third person limited narrators, is very well-spoken, maybe too well-spoken to accurately portray his age, actually, even allowing for a culture at which one comes of age around fifteen.

Though sexual relationships are perhaps more key to the plot in this book than in many teen novels, in truth, I think there are probably more graphic and more blunt sex scenes in some teen literature (generally not in what I read, but I avoid most teen romance and most teen issue books).  What truly marks A Game of Thrones as adult literature is its length.  This book would not be publishable as a teen book on the merits of word count alone.  The greatest maximum word count for a teen fantasy manuscript that agents will consider that I have found is 120,000; the Internet claims that A Game of Thrones nears a hefty 298,000 words.  Teens who love to read and aren’t daunted by page count shouldn’t be discouraged from reading this book.

A Game of Thrones further deviates from the majority of books that I read in that is so very plot- rather than character-driven.  When I realized that with the wealth of characters, I was shipping no one, I began to suspect such was the case.  Now, if I’m planning marriages, they are marriages of position and peace-brokering not love.

Martin’s political intrigues are exceedingly twisted and leave the reader guessing and second-guessing whom to trust and what is best for the kingdom.  His world itself is vast, though not exceedingly well-mapped (though Martin just published a book of maps to complement the text).

This review is not endorsed by George R. R. Martin, Spectra, Bantam Books, or Random House, Inc.  It is an independent, honest review by a reader.