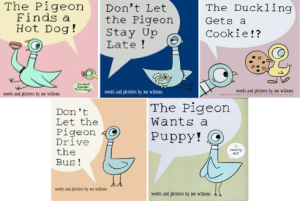 Mo Willems, one of my favorite authors, has written a series of seven picture books thus far featuring the Pigeon and occasionally guest starring the Duckling.  I have read five of those seven and cherish every one for the Pigeon’s very realistically childlike voice—albeit that the Pigeon’s is frequently a very sulky or a very angry child’s voice—and the equally realistic youngest sibling craftiness of the Duckling, who always seems to get what he wants from the Pigeon and the world in general.

Both the lifelike voices and the Pigeon’s outlandish desires and stories make the stories scintillate with humor.

The illustrations are cartoonish.  The characters are boldly outlined—if I had to guess, using the side of a pencil’s lead—and speak mostly in speech bubbles.  The Pigeon’s anger is expressed by a dark pall that hangs over his head, and grows larger the angrier he becomes.  The color palette is soft, which actually tends to contradict rather than compliment the Pigeon’s excitement but would be soothing to a child at bedtime.

The books tend to follow a simple storyline.  The Pigeon wants something—to do something, to have something.  He tells the reader why he wishes this.  He complains about how unfair it is that he cannot or does not have it or is not allowed to do it.

[SPOILERS] In The Pigeon Finds a Hot Dog!, the Duckling comes to inquire all about the taste of a hot dog, which he claims to never have tasted before.  He takes notes.  The Pigeon sees through his ploy to acquire the hot dog, but eventually caves to the Duckling’s request to split the hot dog in half.  There might be a lesson here about sharing.

In The Duckling Gets a Cookie!?, the Duckling offers his cookie, after the Pigeon’s railing and ranting, to the Pigeon, then asks for the kind of cookie that he prefers.

In The Pigeon Wants a Puppy! the Pigeon tells the reader about his newest desire, only to be confronted by the reality of a puppy and decide he doesn’t want one after all.  He ends by desiring a more outlandish creature.

In Don’t Let the Pigeon Stay Up Late! the reader is asked to put the Pigeon to bed by an adult who wanders away in the first few pages.  The Pigeon lists all the reasons he should be allowed to stay up, but ultimately falls asleep before the adult returns.

In Don’t Let the Pigeon Drive the Bus! much the same happens, although this time the bus driver who forbade the Pigeon from driving the bus and asked for the reader’s help in enforcing the rule returns and drives away before the Pigeon can get on the bus.  A semi then drives past. [END SPOILERS]

Are these books particularly educational?  Perhaps not, but they are fun, and I think that they are books that children—and perhaps even more so adults—will enjoy for their lifelike voices.

Overall, I give the series

Also in this series:

This review is not endorsed by Mo Willems or Hyperion Books for Children.  It is an independent, honest review by a reader.